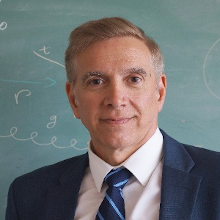 Biosketch: Incandela’s research has primarily focused on the search for new fundamental particles at high energy colliders. He is currently a member of the CMS experiment as well as the LDMX dark matter experiment conceptual design. He has proposed and led large instrumentation projects and data analysis efforts. He was a leading contributor to the discovery of the top quark in 1995, and the leader of the CMS experiment at the time of the first observation of the Higgs boson.

Prof. Incandela received his PhD in Physics from the University of Chicago with a search for magnetic monopoles with superconducting loops. He was awarded a CERN Fellowship in 1987 and joined the UA2 experiment where he contributed to the first precise measurements of the masses of the W and Z bosons. He joined INFN Milano where he proposed and led the first search for a charged Higgs boson via hadronic tau decays. He was awarded a Wilson Fellowship and later promoted to Scientist I and II at Fermilab before joining UC Santa Barbara in 2001. He led the construction of the SVX silicon vertex detector for the CDF experiment and then led the search that used SVX to obtain the single largest contribution (4.1 ) to the discovery of the top quark, the last of 6 quarks to be found, and the heaviest elementary particle. He next led the construction of the CDF Intermediate Silicon Layers (ISL) and Layer 00 silicon detector upgrade projects for CDF which were important to significant measurements, including the first observation of Bs mixing.

Incandela formed and led the US particle tracker project for CMS and went on to participate in the Higgs search and searches for new particles associated with models of Dark Matter/SUSY. He was part of the leadership of CMS physics coordination for the 3 years leading up to first data-taking in 2009-10. He was then appointed Deputy Spokesperson (2010-11) and elected Spokesperson (2012-13) during which time the CMS and ATLAS experiments discovered the Higgs boson.

Prof. Incandela is a member of the National Academy of Sciences, American Academy of Arts and Sciences, and co-recipient of the Fundamental Physics Prize (Breakthrough Foundation) in 2013. Since 2016 Incandela has served as the Vice Chancellor for Research at UC Santa Barbara while continuing to pursue his research with the CMS and LDMX experiments.