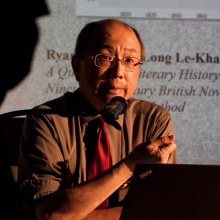 Liu began his research in the 1980s in the field of British romantic literature, working in the mode then call “the New Historicism” to explore the relation between the imaginative experience of literature and of history. In a series of theoretical essays in the 1990s, he explored the New Historicism, cultural criticism, and postmodernism. In 1994, when he started his Voice of the Shuttle Web site for humanities research, he began to study information culture as a way to close the circuit between the literary and historical imagination and the technological imagination. He is particularly interested in information cultures and platforms that seem to know no sense of history at all. Since the 2000s, he has concentrated on the digital humanities. He is founder of the Transcriptions Center for digital humanities and new media studies in the UCSB English Department. Digital humanities projects he has directed include the UC Transliteracies multi-campus research group on online reading, the RoSE (Research-oriented Social Environment) project, and the Mellon Foundation funded WhatEvery1Says project on public media discourse on the humanities.

Alan Liu is Distinguished Professor in the English Department at the University of California, Santa Barbara. He has published monographs titled Wordsworth: The Sense of History (1989); The Laws of Cool: Knowledge Work and the Culture of Information (2004); Local Transcendence: Essays on Postmodern Historicism and the Database (2008), and Friending the Past: The Sense of History in the Digital Age. Recent essays include “Toward a Diversity Stack: Digital Humanities and Diversity as Technical Problem” (2020), “Data Moves: Libraries and Data Science Workflows” (2020), "Teaching 'Literature+': Digital Humanities Hybrid Courses in the Era of MOOCs" (2017), "N + 1: A Plea for Cross-Domain Data in the Digital Humanities" (2016), and "The Meaning of the Digital Humanities" (2013). Liu is founder and co-leader of the 4Humanities.org advocacy initiative.