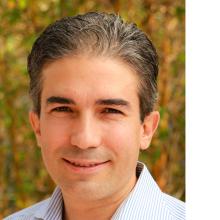 Francesco Bullo is a Professor with the Mechanical Engineering Department and the Center for Control, Dynamical Systems and Computation at the University of California, Santa Barbara. He was previously associated with the University of Padova (Laurea degree in Electrical Engineering, 1994), the California Institute of Technology (Ph.D. degree in Control and Dynamical Systems, 1999), and the University of Illinois. He served on the editorial boards of IEEE, SIAM, and ESAIM journals, as IEEE CSS President and as SIAG CST Chair. He is the coauthor of “Geometric Control of Mechanical Systems” (Springer, 2004), “Distributed Control of Robotic Networks” (Princeton, 2009), and “Lectures on Network Systems” (Kindle Direct Publishing, 2022, v1.6). He received best paper awards for his work in IEEE Control Systems, Automatica, SIAM Journal on Control and Optimization, IEEE Transactions on Circuits and Systems, and IEEE Transactions on Control of Network Systems. He is a Fellow of IEEE, IFAC, and SIAM.