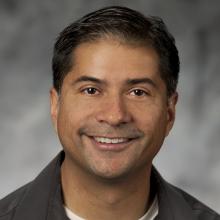 Pradeep Sen is a Professor in the Department of Electrical and Computer Engineering at the University of California, Santa Barbara. He graduated from Purdue University with a B.S. in Computer and Electrical Engineering and from Stanford University with an M.S. and Ph.D. in Electrical Engineering. During his Ph.D., he was advised by Dr. Pat Hanrahan and conducted research in real-time rendering and computational photography in the Stanford Graphics Lab. His research interests include algorithms for image synthesis, computational image processing, and computer vision, and he is a co-author of over 50 technical publications, including many at SIGGRAPH and SIGGRAPH Asia. Dr. Sen has been awarded more than $2.2 million in research funding, including an NSF CAREER award in 2009.