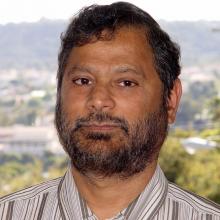 S. Rao Jammalamadaka is a Distinguished Professor in the Department of Statistics and Applied Probability, who has broad research interests in the areas of statistical theory and methods. His recent work covers  large sample theory in estimation and testing, model checking and validation, directional statistics etc. and includes research monographs on "Linear models and Regression with R", "Topics in Circular Statistics", and a free book on introductory statistics, titled "Essential Statistics with Python and R." He has guided over 46 Ph.d. students on varying topics, including machine learning.

Professor Sreenivasa Rao Jammalamadaka, known to many also as J.S. Rao, is among the leading researchers whose work has had significant influence on the theory and applications in certain areas of statistics such as directional data and goodness of fit testing. Professor Jammalamadaka earned his Ph.D., M.Stat. and B.Stat. degrees from the Indian Statistical Institute, Calcutta. He started his academic career at the Indiana University before moving to the University of California, Santa Barbara in 1976, where he is now a Distinguished Professor.

Professor Jammalamadaka is the author of 3 books and over 200 research publications. He is known for his pioneering work in developing new tools for modelling and analyzing directional data. He supervised more than 46 Ph.D.‘s who are now working as academicians and as statistical practitioners in various organizations all over the world. In recognition of this, he was given the "Outstanding Graduate Mentorship Award" by the University of California, Santa Barbara in 2017. He has held visiting positions at various universities around the world, and is the founder, and first Chair of the Department of Statistics and Applied Probability at the University of California, Santa Barbara.

Professor Jammalamadaka received various awards and honors. He has been elected a Fellow of the American Statistical Association, the Institute of Mathematical Statistics, the Institute of Combinatorics and its Applications, and is an Elected Member of the International Statistical Institute. He has been awarded an Honorary Doctorate by the Swedish University of Agricultural Sciences in 2012, and received Honorary Fellowship of the Indian Society for Probability and Statistics in 2014. In December 2019, he received the"CR Rao Lifetime Achievement Award" from the Indian Society for Probability and Statistics. His professional work, among other activities, includes serving on many editorial boards.