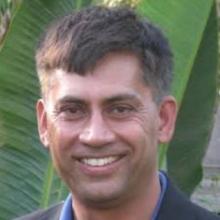 Professor Suri's research focus is design of scalable algorithms and data structures. At UCSB, he co-directs the Algorithms and Theoretical Computer Science laboratory, with a mission to develop fundamental geometric and network algorithms of broad applicability. The research produced by his group has spanned a number of areas including Computational Geometry, Graph Theory, Computational Game Theory, Sensor and ad hoc Networks, Robotics, Social Networks, Databases, and AI.

Subhash Suri is a Distinguished professor of Computer Science at the University of California, Santa Barbara. He received his Ph.D. from The Johns Hopkins University in 1987, has been a member of the Technical Staff at Bellcore (1987-1994), and an associate professor at Washington University in St. Louis (1994-2000). He was a visiting professor at ETH Zurich during 2006-07, and chair of the Computer Science department at UCSB during 2011-14. He is a Fellow of the Association of Computing Machinery (ACM), the American Association for the Advancement of Science (AAAS), and the Institute of Electrical and Electronics Engineering (IEEE).